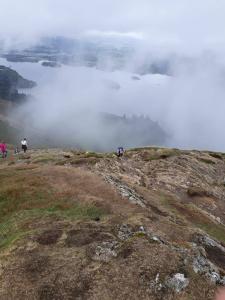 Yesterday I climbed a mountain with my family.

Actually, to be honest, it’s more accurately described as a ‘fell’, and most seasoned fell walkers or mountaineers would regard it as a relatively straight forward ‘un-technical’ challenge, posing very little danger. But for us it’s a big deal, okay!

Anyway, it’s a mountain we’ve intended to climb for years, but which always seemed particularly intimidating for one reason or another, so we always found an excuse!

This year we decided to do it. No more excuses.

At various points during our ascent, we took it in turns to voice our doubts, fears and ambivalence (although to be fair, I don’t recall my eldest daughter doing this once – she practically skipped all the way to the summit seemingly without a care in the world, only stopping occasionally to sit on a rock and wait patiently for the rest of us to catch her up!).

Every time this happened, one of us eventually became irritated, amused or concerned enough to counter with some statement along the lines of all being in this together and keeping going, “to that next bit there, then we’ll see”.

I confess the interaction between my youngest daughter and I became somewhat bad tempered on several occasions, and at one point I snapped at her “look, this is difficult enough. I don’t need to hear you sowing seeds of doubt, I need to hear that we can do this!”. She reacted defensively. I begrudgingly accepted I should be patient with her.

My wife, throughout, maintained the voice of reason, and often reminded us all of the value and practical application of mutual encouragement. Above all, she encouraged us to be kind to each other.

As we eventually approached the summit, we encountered a final scramble. One last treacherous obstacle in our way.

Halfway through this scramble, with one knee up by my ear, one foot trembling on a knife edge of rock, and a view beyond my outstretched arm of a sheer drop, I froze and called out “I don’t think I can do this!”, then after what seemed like an eternity of contemplation and the astonishment that I might actually be about to give up, I heard the voices of my family saying almost in unison “You’re doing so well! You can do it!”.

I dug deep and hauled myself up and on to the clear path to the top of the mountain.

As I stood gazing at the last, relatively straight forward stretch, my youngest strode past me, confidently saying “we can do this!”.

After a short walk, we found my eldest daughter smiling at us calmly from the peak she’d arrived at minutes before.

My wife cheerfully exclaimed “well done everyone, we did it!”, we rewarded each other with a lovely group hug and, as my youngest unpacked her kite and flew it from the top of one of England’s highest points, we all agreed that this achievement changes things in a very good way.

View all posts by Chris Ward